Even in the days of the old waterfall model , one of the key factors of success was to identify issues and defects as early as possible so as to minimise remedial costs. But what if the wrong product is being made in the first place? This is a quality issue which is much harder to identify internally. In fact, it’s often not identified until the product is already in the hands of the customer.

However, the days of the old waterfall model are long gone. Yet, the more modern approach of Scrum , with its two to six-week fixed sprints (which potentially waste time) doesn’t safeguard developers from making the wrong product. Let’s do the math, based on a 4-week sprint. Let us assume a company with 50 developers working full-time on its software product. If 75% of their time goes to developing new functionality, that comes to a total of 6,000 hours spent on new functionality during one of these sprints.
That’s a lot of work and time put in before getting feedback.

Of course there are internal feedback mechanisms in place, but at the end of the day, it’s the customers’ verdict that matters. What should be done is to minimise the time between development and deployment.

In practise, this is achieved using the Kanban process , where each feature goes through our development process of analysis, development and testing, independent of other features. For each feature, a new instalation package is created, ready to be deployed for instant feedback.

This minimises the waste in the development process and allows more time to design great features, resulting in a better product for customers.

Mattias Engblom
Mattias Engblom is VP, Cloud Engineering at Calabrio and based in Stockholm. He first joined Teleopti, which was acquired by Calabrio in 2019, as a summer intern during his computer science studies at the university. After working as a management/IT consultant, he again joined Teleopti as a presales consultant. He became CTO of Teleopti in 2012 and was named VP of Cloud Engineering at Calabrio in 2019.
Recent Posts
Previous
Next 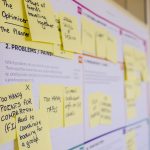 Agent satisfaction vs. agent engagement – promoting the latter
Send this to a friend